What Is Morganite Stone? Morganite is a pink or peach colored  gemstone belonging to the Beryl mineral family, and is thus a close relative of Emerald and Aquamarine. Available in many colors including pink, rose, peach, lavender and salmon, the pink and peach colored stones are the most sought after today. Morganite is mined from the earth and is considered a semi-precious gemstone which has become very popular for use in engagement rings. 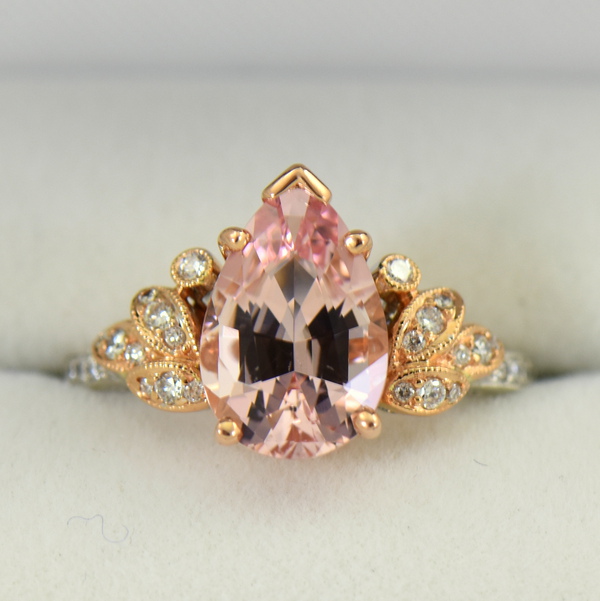 Morganite Meaning: Due to its soft pink hue, morganite is often associated with a sense of innocence, sweetness, love and romance. Around the world, morganite is also symbolic of healing and promise. It is one of the most popular gemstones used in engagement rings, and the pink hue is love in gem form. Since Morganite was only discovered within the last 120 years, it does not have the generations of lore and centuries of mysticism that some gems have. Instead, Morganite gets is meaning from its color and from the exciting energy it gives off.

So what’s the deal with Morganite anyway, you know, that peach colored gem everyone wants?

In the past couple of years Morganite has gone from a rarely encountered collectors-only gemstone to one of the most requested gemstones we carry. Before I analyze why that has happened it is good to establish what Morganite is in the first place. Morganite is the pink to orange variety of the mineral beryl (so it is a cousin of Aquamarine and Emerald) thus it is a durable 7.5-8 on the Mohs hardness scale. Morganite was named after financier JP Morgan who backed the gem exploration trips that discovered Morganite in California and again in Madagascar. Since that time Brazil has become the primary source of pinker Morganite with African countries such as Nigeria and Mozambique sourcing most of the peach and orange gems. (Above photo is an untreated pear morganite set in an engagement ring) 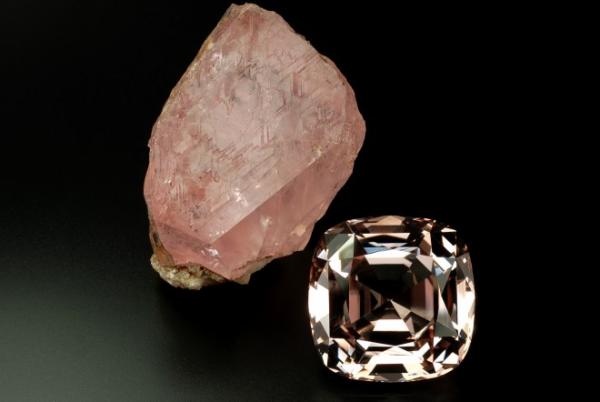 So what catapulted Morganite into popularity?

The first factor was discoveries of new Morganite deposits in Africa. Prior to 2000 the Brazilian deposits were the only commercially viable sources of Morganite, but most of the gems from these mines were a very faint pink. In the early thousands we started to see beautiful peach Morganite gems from a find in Pakistan, but this supply was soon exhausted.  Fortunately in 2010 two new deposits were found in East African countries. Not only have these sources provided some natural Morganite, but they also produce faint pink to colorless material that can be treated to attain the famed rich peachy color. Thus we are seeing more Morganite on the market and at lower prices than years past, making it an attractive gem for designers and jewelers to work with.

(Photo at right is courtesy of Nomad’s gems, one of our key Morganite suppliers. The cut stone weighs 190cts, and both pieces come from a new source in Mozambique.)

The second factor increasing Morganite popularity has been the focus on pastel shades in the design world, and the use of rose gold engagement rings. For the past 15 years Pantone has chosen a medium or light shade of blue, pink or orange for its Color of the Year, and in 2018 it was “Rose Quartz” which bears a striking similarity to the pink shades found in Morganite. In both 2015 and 2016 the more orange-peach shade was a noted “spring color” in the clothing and accessories world, increasing demand for high-end fashion jewelry with Morganite. Concurrently we have seen an increase in demand for rose gold, which happens to look amazing set with Morganite since it richens the color of the gem. The peach-in-rose-gold combo has become so popular that we have sold several engagement rings featuring it! (Below left: Nigerian natural Morganite set in rose gold and platinum, Middle: Brazilian morganite cut by John Dyer set with a heart-shaped diamond Right: 6ct oval Morganite from a new deposit in India set with round diamond accents.)

Hold onto your hats, it’s about to get technical.

People who are interested in Morganite quality factors should know that, like many colored gemstones, the grading is highly subjective. While most gemologists agree that Morganite should be free of noticeable imperfections, agreement ends there. Gem collectors tend to want a medium pink color, untouched by violet or peach undertones. The more pink the better to a collector. However most of our clients want a medium to light peach color, with just a hint of pink, and a strong dose of orange. We tend to think that no matter which color you prefer, the key factor is a precision cut, as a good cut can intensify the base color of the gem and makes the end piece of jewelry much more sparkly and attractive.

(The four gems at left are totally natural and untreated. The first three are Nigerian, the last is from Pakistan, showing the more pink hue. The right four gems are the treated material, the first two from Mozambique, the second two from Brazil, with a more peachy tone.)

Pricing for Morganite has a wide range. The paler shades of peach in sizes under 5cts can be had for $50/ct, whereas the deepest peachy pinks in 5-10cts can be $500/ct. A premium is paid for natural gems from southern California and Nigeria that are totally untreated- these gems tend to be under 3cts in size but occur in deeper colors, and can be had for between $250-700/ct- if you can find them. The popularity of Morganite and pastel gems in general has increased demand for peachy colored Tourmalines, Spinels and Sapphires, so expect to have to hunt for these colors in other gem materials, and pay a premium too.

We have over 30 natural Morganites in stock, from 1ct to 25cts. Most of our gems are cushion cut, oval, pear, round, and emerald cut, though we are able to source any size, shape and color by request. For more information on Morganite Semi-Precious Stones contact us today, or stop by to see them in person!