Ready to be green with envy?  For centuries, green lovers had one choice if they wanted a deep green gemstone: natural Emeralds. However, natural Emeralds of fine quality are quite rare. Most on the market are a bluish green or a medium kelly green Emerald, not the rich green people covet. Most of us can’t afford the perfect Emerald-green Emeralds we see in textbooks. Luckily, new gem finds in the last century have given us new and varied options. There are now quite a few alternatives available that many people do not yet know about. Being a jeweler in Federal Way, Washington State, in my opinion the best alternative is Tsavorite garnet. There are also varieties of green Tourmaline, specifically Chrome Tourmaline, which can rival Tsavorites and Emeralds in color. Other green gemstones, such as Peridot, Green Sapphire, Tourmaline (not Chrome), and Green Zircon lack the intensity and vivid coloration found in very nice Emeralds, but are pleasing in their own right.

I am a May baby, and I am also a jeweler. Accordingly I have a deep and true love of fine Emeralds. The dark bluish green color coupled with a near fluorescent glow is truly captivating. I enjoy faceted emeralds when they are of top color and clarity, but I personally wear a cabochon Colombian emerald in my pinky ring that has an organic look to it. (Below are just a couple of the emerald rings we have made). That said I understand that many May babies do not like their often cloudy and dull birthstone. For those who want the traditional diamond-like sparkle in their jewelry emeralds can be disappointing. Furthermore, to purchase the top color and clarity in an Emerald you have to be willing to pay higher prices. Good quality 1ct Emeralds start in the $2500 range, with fine quality often costing 4-6 times that amount. So if you want that green color for 1/10th of the price, consider a natural Emerald alternative. 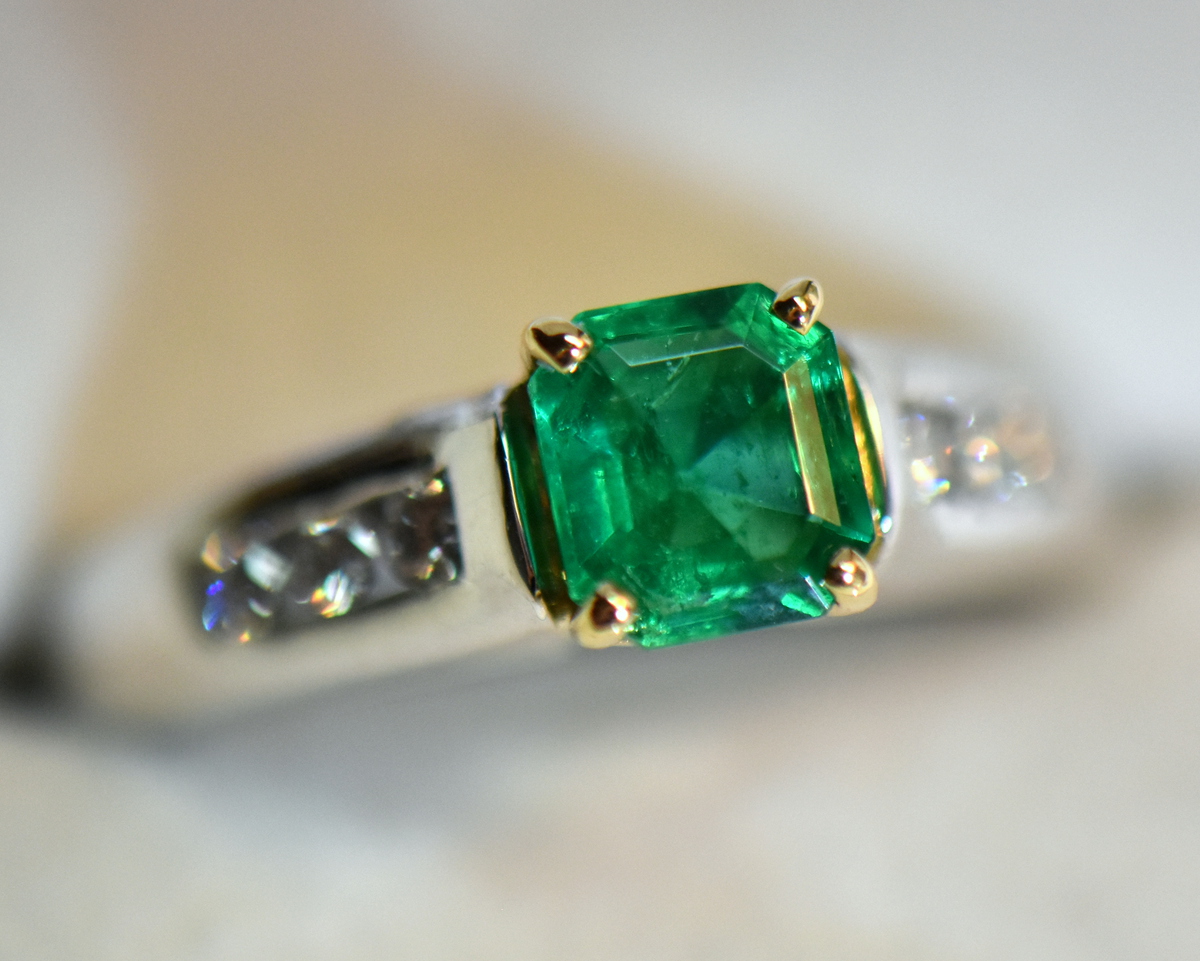 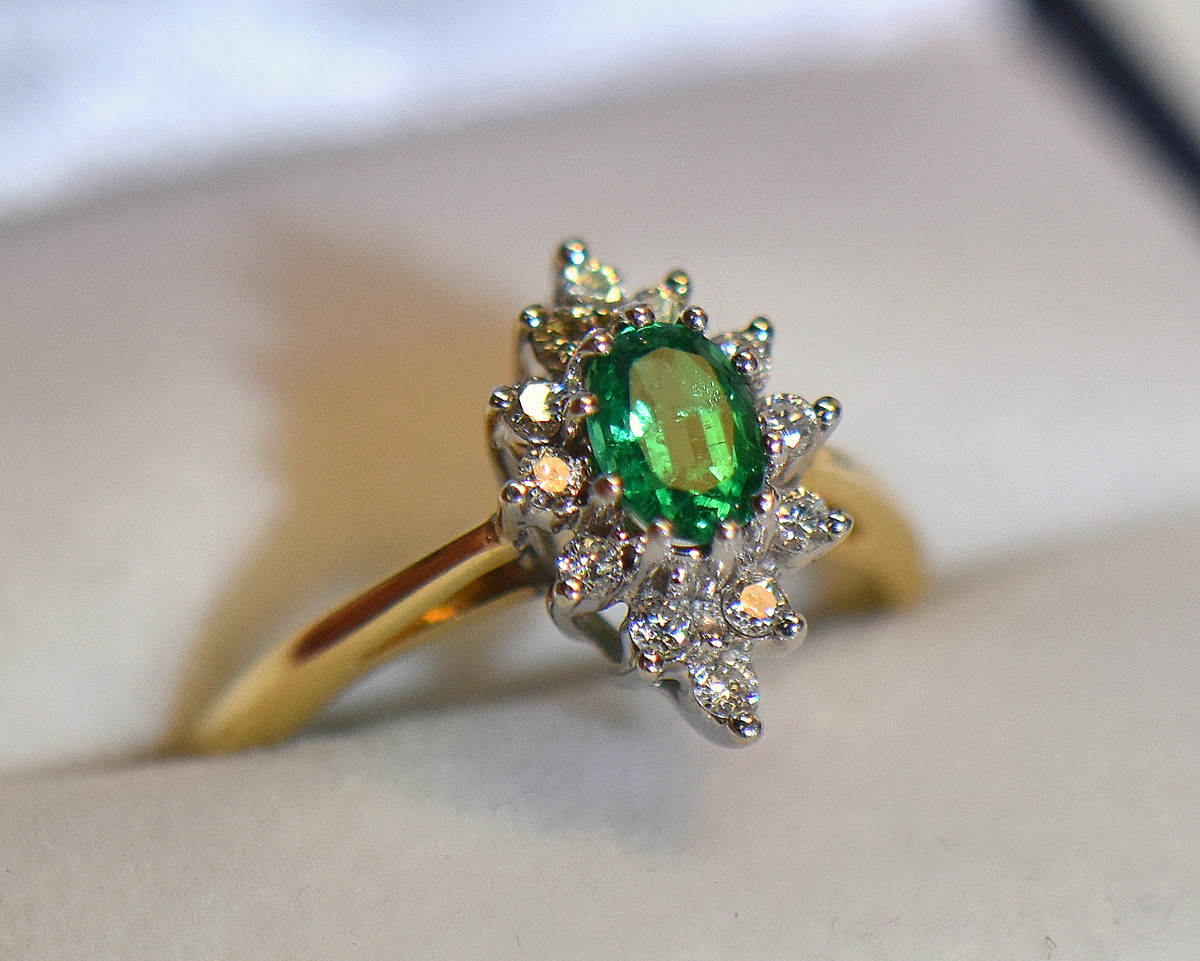 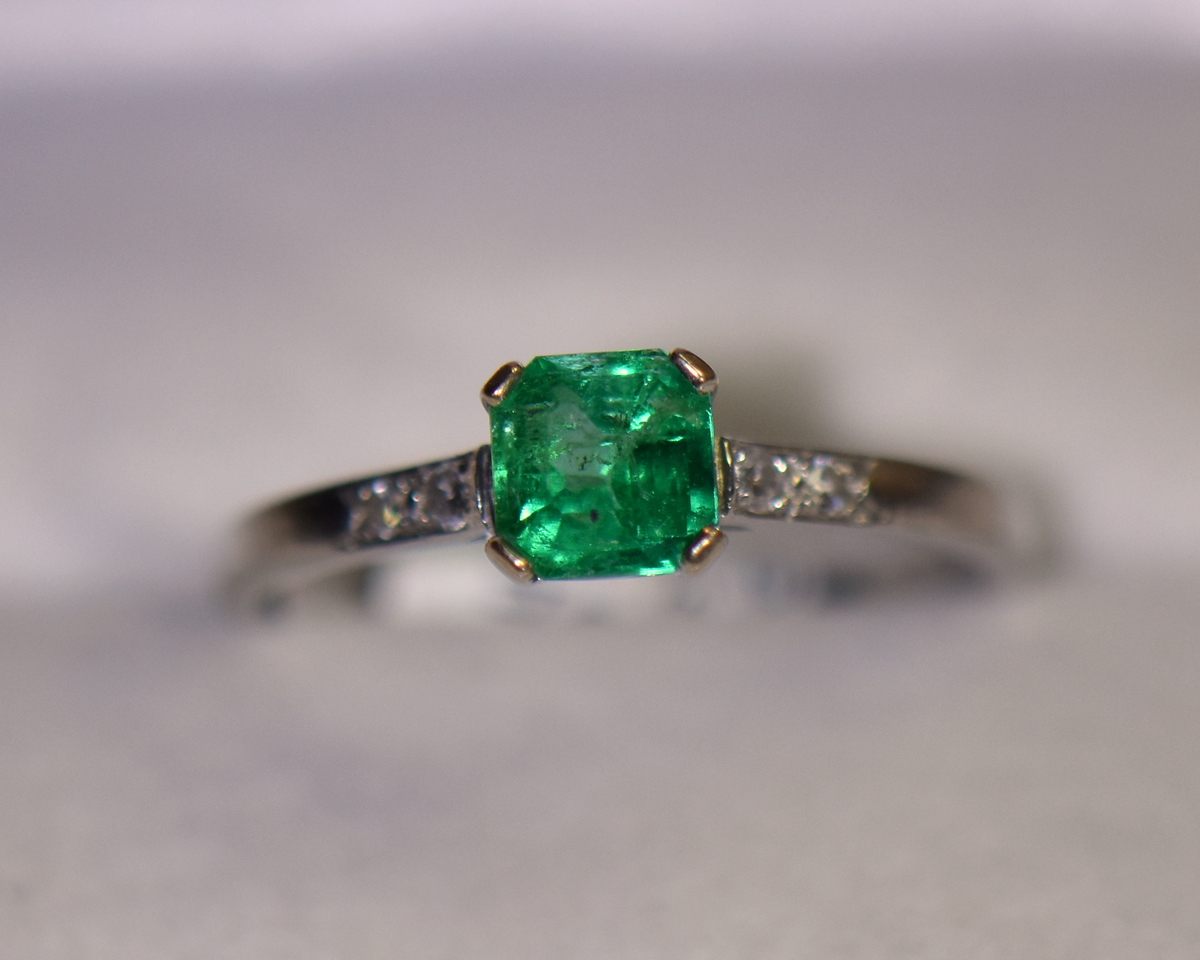 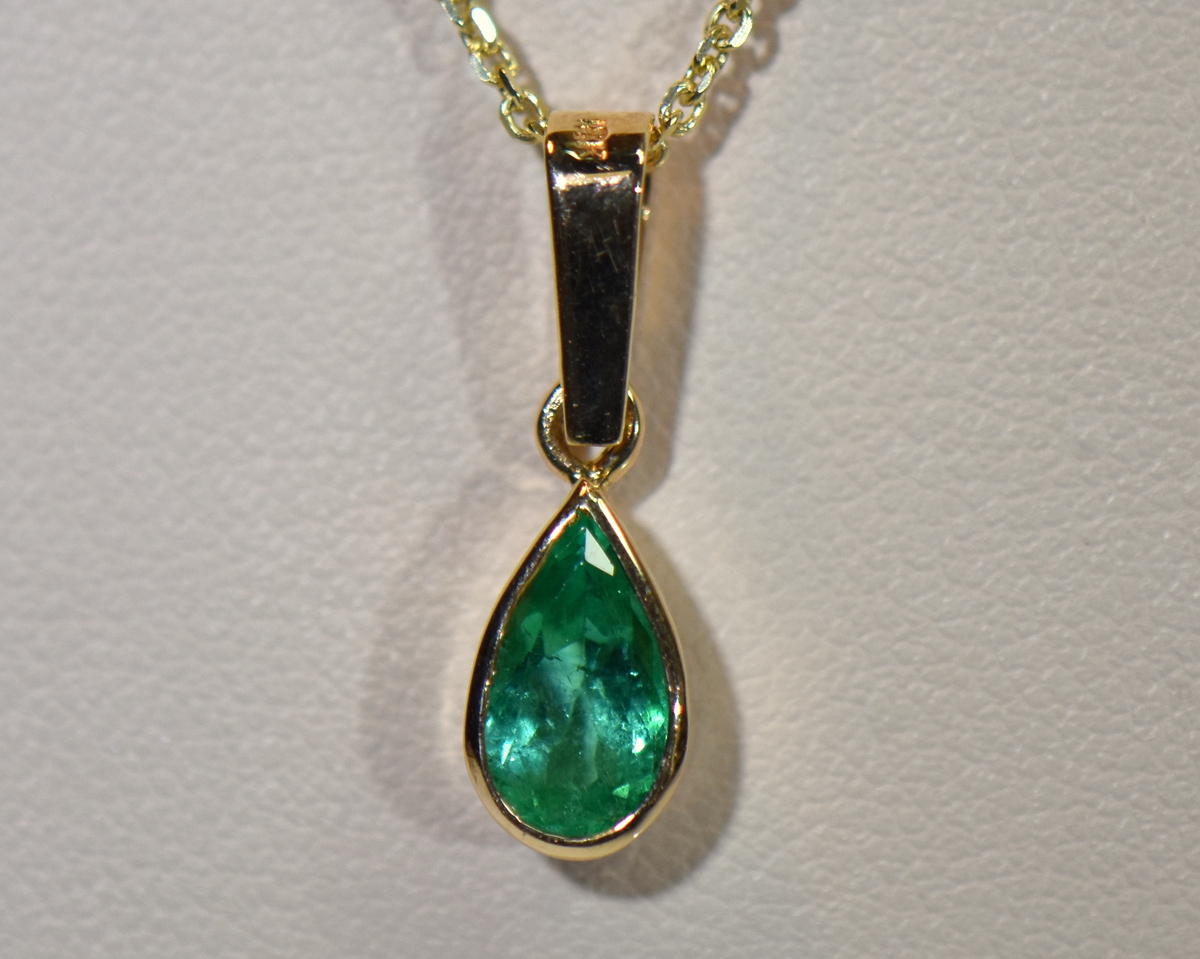 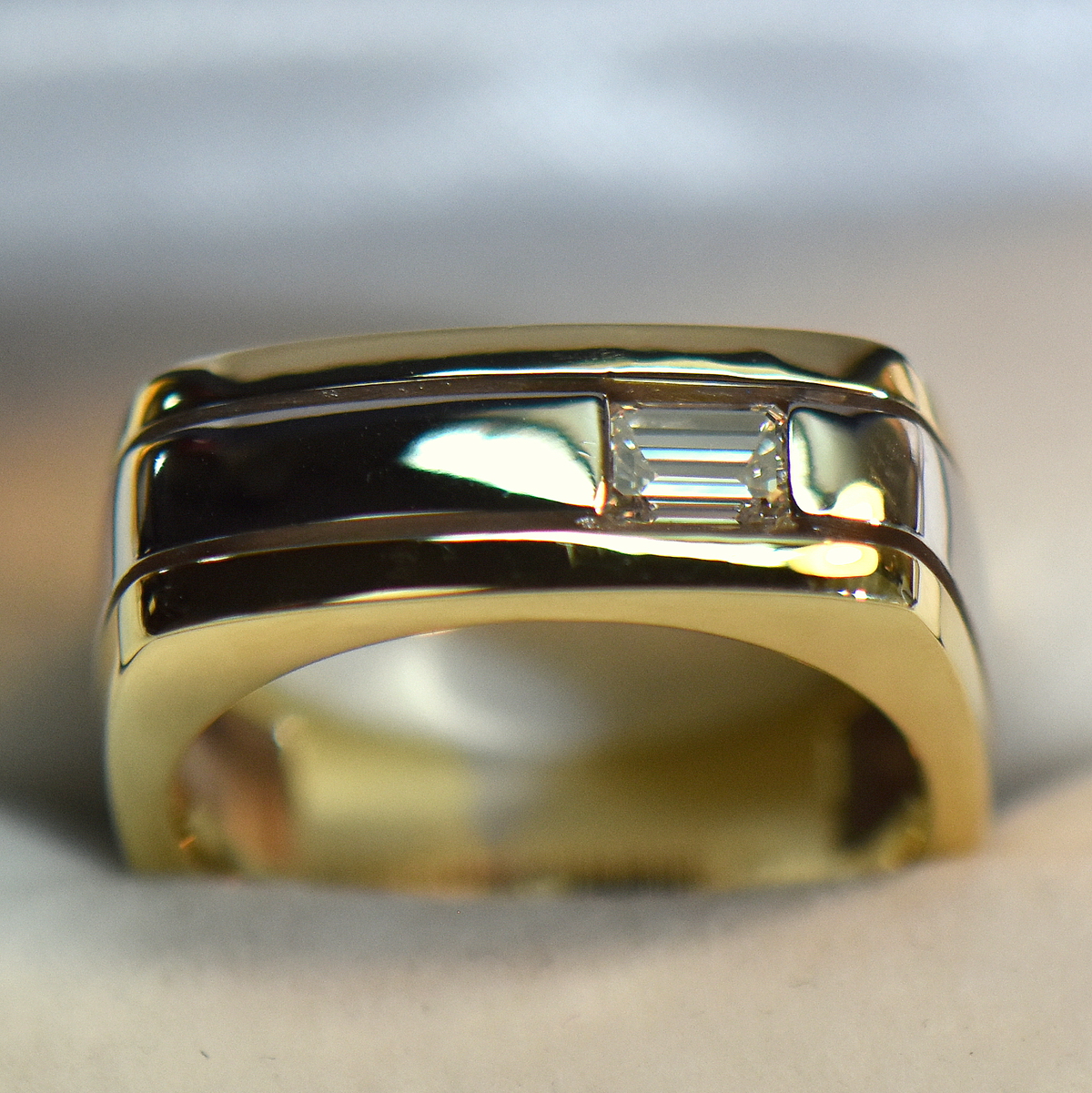 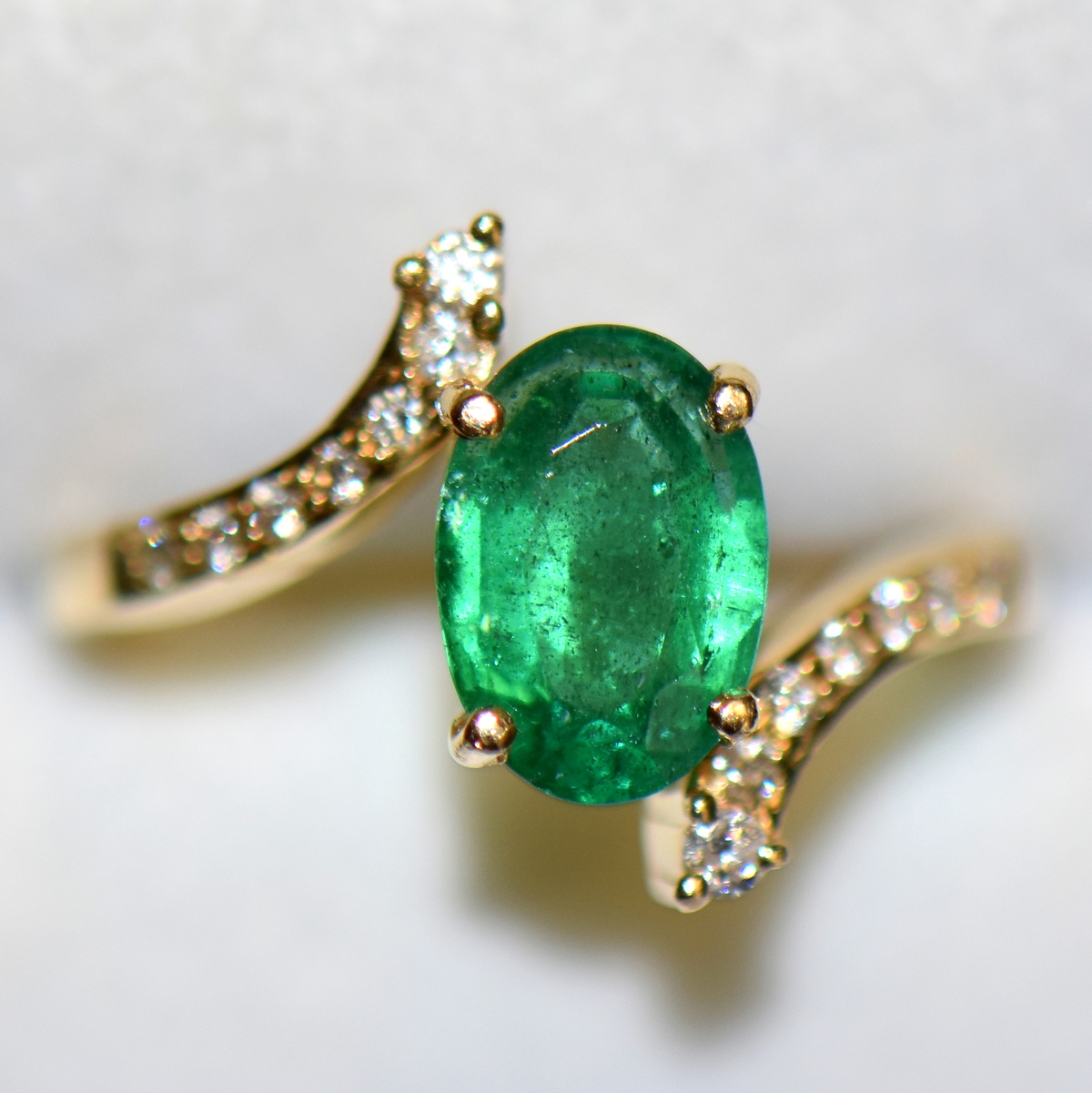 In my opinion the best alternative is Tsavorite garnet. Tsavorite, or green grossular garnet, is a relative newcomer to the jewelry world being discovered in the 1960s in Kenya. It was first purchased and marketed by Tiffany and Company, but has since been popularized by custom jewelers who have fallen in love with it. (PS- when Tiffany made the Seahawks’ Super Bowl ring, they used tsavorite as the hawk eye- see below). 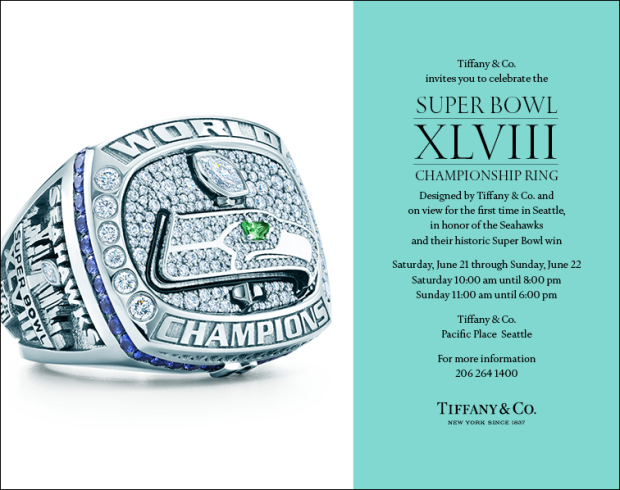 Tsavorite ranges in color from a deep bluish green, nearly emerald in color, to a vivid Kelly green and down to a light yellowish or minty green (known as Merelani mint garnet). The most unique thing about tsavorite is not the color but the brilliance associated with it. Most of the gems we carry are eye-clean, with none of the inclusions that mar the beauty of most Emeralds. Furthermore Tsavorite has a high refractive index which means that the play of light is magnified in the gem, which causes it to have superior sparkle and shine. Tsavorite is definitely an up-and-coming gem, but it can still be found in top qualities for about 25% of the cost of a comparable good Emerald, or 1/10th the price of a super fine Emerald.. We actually find many clients, even those with large budgets, choosing Tsavorite since the stones have a more pure green hue and better sparkle- but to each their own. (Below are a few tsavorite rings we have made).

My second choice for an Emerald substitute would be green Tourmaline, or verdelite. There is no other gem species that comes in as many colors as Tourmaline and the variety in hue, shade, and tone is unending. Thus we can source green Tourmalines that are nearly identical to emerald in color, but we can also find teals, mints, brownish greens, and even rare pure greens. It should be noted that for centuries fine green tourmalines were thought to be Emeralds, and it wasn’t until the advent of modern gemology that the difference was known. (Below are a Brazilian Teal Tourmaline, Chrome Tourmaline, and African Green Tourmaline)

I would argue that the rare pure green Chrome Tourmaline are the best Emerald substitute. They are known as chrome tourmalines because they are colored by Chromium, the same element that gives Tsavorite and emerald their rich green looks. Chrome tourmalines are quite rare and are only found in minor deposits in East Africa, and rarely exceed 2cts in size. That being said they occur in a pure green that is nearly as good as tsavorite, and they are a little less expensive.

Green Garnets and green Tourmalines are really the only gems I would consider to be a worthy substitute for Emerald. I am frequently asked about green Sapphire and while they are a gorgeous stone, they never occur in a color rich enough to be like an Emerald. Most green Sapphires are medium to medium dark with an olive or forest green look, even teal, not Emerald green. Likewise many people hear about chrome diopside and want to compare it to an Emerald or Tsavorite. Again, there is really no comparison. Chrome diopside tends to be very dark and it always has a strong yellow or brown modifier that makes it earthy as opposed to a jewel color. It is also a soft gem that cannot be worn on a daily basis, so we consider it more of a collectors gem than an emerald substitute.

The benefit of Federal Way Custom Jewelers is that we have over 2000 loose colored gemstones in stock, including many Emeralds, Tsavorites and Tourmalines, which you can view in person and compare against each other. Don’t take our word for it- come see for yourself and choose your favorite green gemstone. We are sure that you will leave green with envy. If you would like more information on these Emerald substitutes, why not contact us. We will be happy to talk to you – no obligation whatsoever – and advise you of various choices and options.