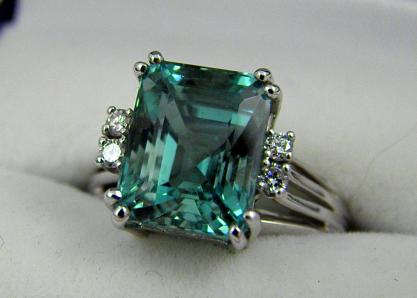 Statement Rings are most probably what you will think of when you first hear the term statement rings. In the simplest form, they are rings that are worn to make a statement. In other words to attract the attention of others in the vicinity. And they certainly make a rock-solid talking point.

Statement rings are usually offered in gold or silver and are definitely the choice of many women in today’s “high society.” They add to their wardrobes and are used to make the maximum impact at various functions.

The meaning of the statement ring is quite simple: to make a statement whether at a party or high-society function where there will be an overload of statement making jewelry.

Statement rings, aka cocktail rings, are terms commonly applied to large right-hand rings that are fun to wear and get lots of attention. While large and impressive rings have been worn by the wealthy for centuries, it wasn’t until the middle of the last century that statement jewelry became affordable (and socially acceptable to wear) for the middle class. While these rings were frequently made in gold and platinum and set with gemstones, they were also made by high end costume jewelry makers.

Thus everyone from Jackie Kennedy and Elizabeth Taylor to moms in the suburbs could afford to glam up their wardrobe with a statement piece. Magazines like Vogue, as well as movies such as Breakfast at Tiffany’s, (both shown below) showed women wearing large and impressive jewelry, fueling the trend.

We’ve probably all heard it said that fashion repeats itself. Some even go so far as to say trends follow a 20 year cycle- people in their young twenties emulate what their parents did before them, and thus trends from 20-30 years prior make a reappearance. For example, right now we are seeing aviator sunglasses, printed fabric shirts, bold colored jackets, and lots of other fashions that were popularized in past decades. We see this same trend occur in the jewelry world, and chunky statement jewelry has made one of the strongest comebacks of all.

This white gold and aquamarine cocktail ring is a good case study. Made circa 1950, this ring was the height of fashion for the time, usually set with one large colored gem: citrines, amethysts, aquamarines, topaz, etc. The love of large jewelry faded in the down-to-earth 60s, but made a return in the 70s. In the 70s statement rings were “in” again, but tended to be crafted in chunky yellow gold and set with multiple smaller colored gems as opposed to one large center stone- remember the rings that were made to look like a coral reef? The love of chunky yellow gold jewelry made a return in the 90s, except the majority of these statement rings were diamond encrusted without the use of colored gemstones. The above photos show the progression of statement rings from left to right 1950s, 1970s, 1990s.

Thus it should be no surprise that 20 years onward fashion and jewelry trends are once again focusing on statement rings. Women are now wearing large gems set in simple white and yellow tone settings in a style very reminiscent of 1950s high-fashion statement rings. Women who want a bigger look with more variety are buying multiple rings- sometimes simple bands, sometimes set with large gems- and stacking them on the same finger. The nice thing about this particular ring is that it straddles the line between chunky fashion piece and classic right hand ring. While the aquamarine is large and noticeable, the mounting is elegant and the greenish blue color is timeless, so we don’t see this ring ever going out of style.

It should be said that the main reason we are in love with this jewel is the gemmy color of the aquamarine. Today, many people think of aquamarines as a pale blue March birthstone but for centuries the most in-demand color was this intense greenish blue (aquamarine translates literally to water of the sea). The closest thing I can compare it to is frosted sea-glass people collect on the beach- a lovely medium greenish blue with remarkable brilliance and sparkle.This ring is available for $3495- but the ring is truly “unshoppable” at any price due to the rarity of this natural colored aquamarine. We have several other statement rings in stock from various past eras- come in to see them in person!