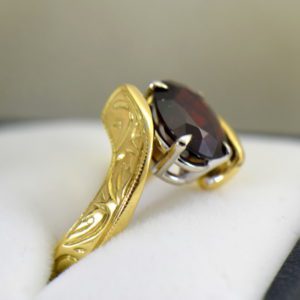 Garnet Engagement Rings: A Red Garnet Gemstone will almost certainly portray a bright red vivid color. However, the garnet is available in several other colors especially brilliant green, beige or gray in daylight. The beige or gray garnet can change into a purply-pink color when looked at in candescent light.

The garnet is a semi-precious gemstone which acts as a shield against evil. It is also used as a healing crystal due to its properties of energy and balance. The question sometimes arises: should I have a garnet in my engagement ring? While fiery red garnets do symbolize peace and good health they are not always suitable for an engagement ring – mostly because of their softness and ability to be scratched. However, please note that our research often reveals that red garnets are a softer mineral when compared with sapphires and diamonds, but some schools of thought tend to class them as a harder gemstone.

Garnet Meaning: The Garnet Gemstone, throughout history, is known to be associated with “fire.” It is also thought to be one of the oldest gemstones offering spiritual protection. Its name is derived from the Latin for pomegranate because of how the garnet shows a similar color to the fruit. The Garnet is also known by other names meaning fire coals as the crystal of the garnet seems to be perpetually soldering. Other meanings of the garnet are passion and strength. 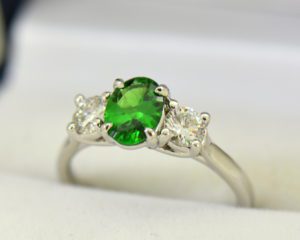 We hope you have enjoyed reading this article about Garnet Engagement Rings and their meaning. This would be a good time to check out our garnet prices and red garnet products in our online store.