According to the American Gem Society, there are three birthstones that represent the month of December. These birthstones get their origin from different times and places- in India and Iran, Turquoise has been treasured since antiquity and became associated with the Sagittarius astrological sign; in southeast Asia, Zircon has powerful meaning, and in Europe where the color blue reigns supreme in December, Tanzanite was added as an alternate birthstones in the last century. The three December Birthstones are Tanzanite, Zircon and Turquoise. All three of these December Birthstones are lesser known but the beauty of them often rivals some of the finest precious gemstones more commonly seen in jewelry. 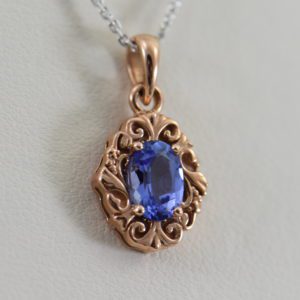 Let’s take a closer look at these three December Birthstones.

Tanzanite is the blue-purple variety of the mineral zoisite, and is named from the geographic location of the single source it comes from, Tanzania, and is one of the rarest birthstones in fine quality. Tanzanite is a relatively newly found gemstone, discovered in 1967, and named by Tiffany and Company- the first jeweler to use the gemstone in large numbers. Its blue-purple hue is caused by trace amounts of vanadium and when mixed with extreme heat, the blue-purple shades appear and darken to an almost Sapphire hue. The colors can range from a pale lavender to intense ultramarine, sometimes with violet undertones. The finest Tanzanites are a nearly Sapphire blue hue with a purple undertone. Tanzanite can display various colors when viewed from different angles, and is often cut in round or trillion shapes to bring out the notorious red flashes. The better the cut of the stone will highlight the attractive blue and violet hues, which will also lessen the effect by the undesirable brown tones that sometimes appear.

Tanzanite is not quite so hard as the Sapphires it is often substituted for, so it is better suited for earrings and pendants or special-occasion rings. Due to the rare blue jewel tone color of Tanzanite and its limited supply, this gemstone tends to be the priciest of the December birthstones. That said, even the finest of Tanzanites in sizes below 3cts can be found in the hundreds, not thousands, of dollars. Some of the most impressive jewels we have made have featured Tanzanite- we all remember the 8ct round Tanzanite solitaire engagement ring we made, and the 15ct trillion Tanzanite and Diamond necklace we custom designed. We are fortunate to have a great stock of Tanzanite jewelry and loose gemstones to choose from at every budget. 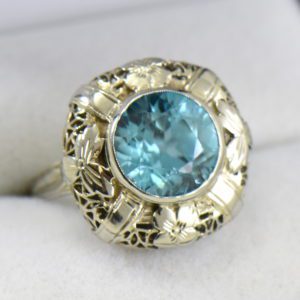 Zircon is the second most valued December birthstone, and blue Zircon is the most traditional choice in the United States. Zircon, a natural gemstone available in a variety of colors spanning red, orange, yellow, green, blue and brown, is often confused with synthetic cubic zirconia, mostly because of the similarity in name and as both are good substitutes for Diamonds. That said, fine Zircon is a natural gemstone in its own right, and is quite beautiful in top quality. However, it is the blue Zircon that represents the December birthstone, and is available in shades of baby blue, aqua, bright blue, and even deep teal shades. Zircon has a very high refractive index which makes it one of the most sparkly of gemstones- so if you are looking for an impressive birthday gift, Zircon may be the perfect choice- and since it has a distinct appearance, we know she won’t own anything like it!

The color differences in Zircon are caused by impurities, some of which can be slightly radioactive. Don’t worry ladies, you won’t need to carry around a Geiger Counter for these stones! Zircon is reported to be the oldest mineral on earth, and since it has this amazing history, it makes for a romantic gift. The December birth stone, Blue Zircon, is mined primarily in Cambodia, but has also been mined in Sri Lanka for thousands of years. While light blue gems under 5ct can be had very affordably, larger gems or those with a medium to dark teal blue shade are quite rare and costly. Some of our favorite December birthday gift ideas are antique or retro Zircon jewelry, popular in the Art Deco and post-War years, and still stylish today. Thus we keep a great selection of Blue Zircons mounted and loose for our clients to choose from, in both antique pieces and our custom designs.

Turquoise is the most affordable, but also the most under-rated, December birthstone which has been used in jewelry since ancient times. It is known for its distinct color which ranges from a powdery blue to a robin’s egg blue- in fact, it is one of the few gemstones that has spawned it’s own color- turquoise blue. While it is commonly associated with sterling silver jewelry from the American southwest, the finest gems have been mined in Iran for millennia and used in fine rings and pendants for hundreds of years. A walk through a museum will show Turquoise beads 3,000 years old from Iran and the Inca in Peru, European Turquoise rings 500 years old, Navaho Turquoise and silver necklaces 150 years old, and modern pieces using Turquoise from newly discovered mines across the world. It is truly one of the most ancient and versatile of gems. We often have Turquoise item, especially Victorian examples set with Diamonds and mid century pieces in textural gold work, available in our antique & estate cases. 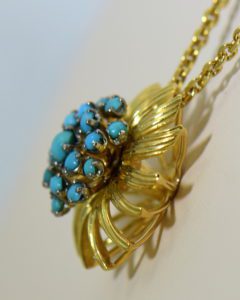 Turquoise has been used as a December birthstone for hundreds of years. Turquoise is relatively soft, which makes it ideal for cabochons and inlay work, but it also has to be protected in the setting when mounted as a Turquoise ring. If you have an antique Turquoise ring, we can often polish the gem to bring back its original luster, though it is hard to bring back the blue color in pieces that have oxidized. The biggest issue we face with Turquoise is finding natural gemstones of fine quality- many gems on the market are dyed or stabilized (a treatment process that uses plastics to fill them) which reduces the gem’s value and durability. We try to source only natural Turquoise from Iran or American mines. These gems can then be used as the focal point in a ring, pendant, bracelet, or any custom design you have in mind.

We hope you have enjoyed reading this article about the December Birthstones of Tanzanite, Zircon and Turquoise. To see some of the examples of these gemstones that we currently have in stock, visit our store – via the link below – and use the search module to find your way around.