What is Imperial Topaz? In general, Topaz is a large gem family most known for yellow gems, or treated blue gems. The terms “imperial topaz” and “precious topaz” are often used to distinguish between true topaz and the more common or treated alternatives. The Imperial Topaz is recognized as being a “golden orange to pink, or fiery red” hue – this is the rarest of all Topaz, and some of the rarest of all gems. 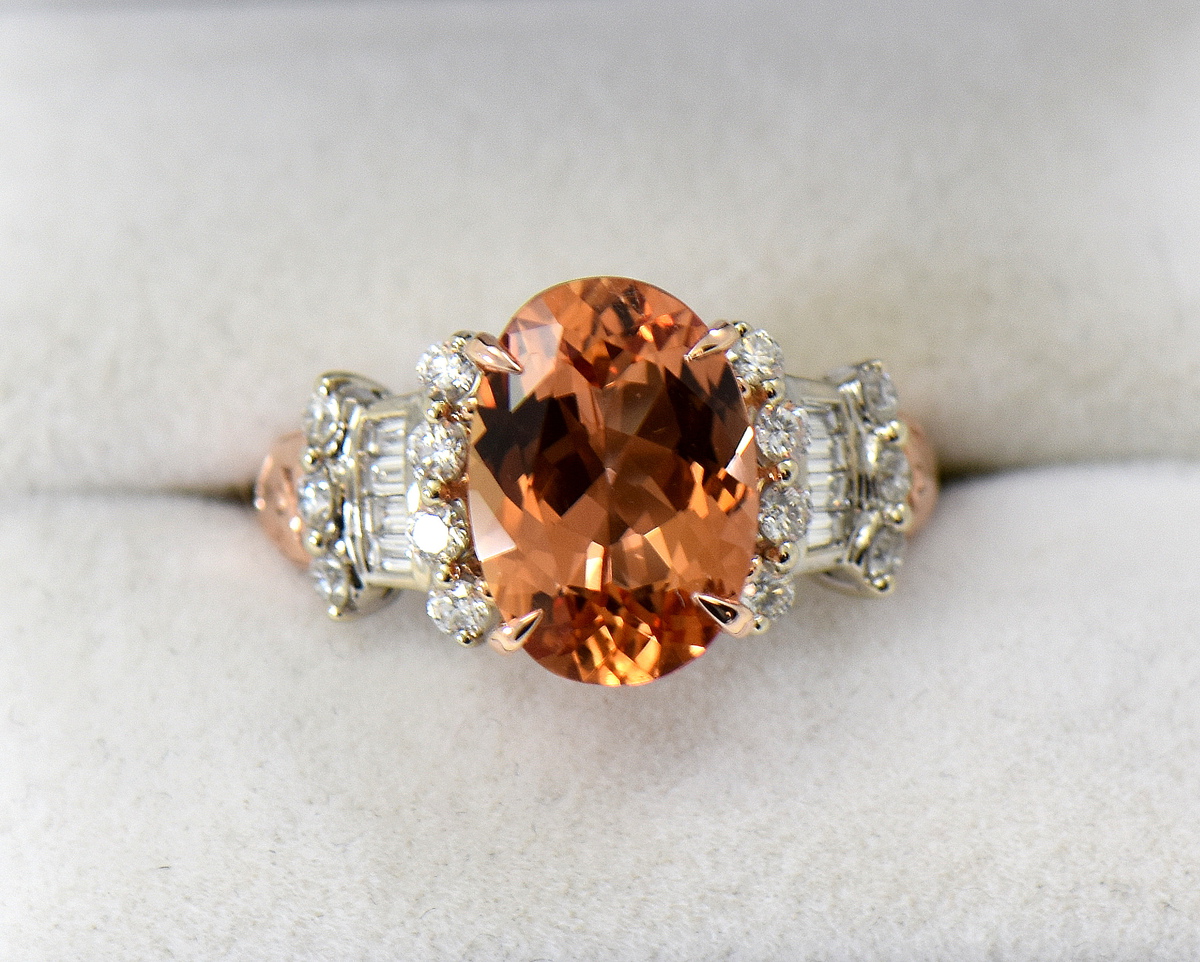 What color is Imperial Topaz?  Color determines the type of Topaz, though there are some common names to learn. Imperial Topaz refers to the rarest colors, usually deep orange, peachy pink, with the rarest gems approaching red in color. Some dealers differentiate it from Precious Topaz, which is often used to describe the yellow to gold variety. Smokey Topaz is used to describe more affordable dark orange and brown gems, though it is often used to falsely describe Smokey Quartz. Topaz can occur in other colors, such and pink and blue, and as such are simply sold by color.

Is Topaz valuable? It depends! The finest red Topaz are ‘as rare as hen’s teeth’ and a dealer can name their price- if you can find one! Even Imperial Topaz is quite valuable since it is so rare. The most expensive colors are the rich sherry orange and peachy pink, which when fully saturated, can costs thousands of dollars. Most Topaz, which is light orange or yellow, sells in the hundreds of dollars per carat. Treated Topaz, such as “blue Topaz” and “mystic Topaz” are beautiful but are much more affordable since the color isn’t natural.

You may be wondering where the term ‘imperial Topaz’ came from. Legend has it that the first Topaz mines, which produced pink Topaz, were in the Ural Mountains of Russia. It is said the the Imperial Russian family fell in love with the gem and used them in gifts to loyal servants and other European Royals. 100 years later, Spanish and Portuguese settlers in South America discovered imperial Topaz in a new mine in Brazil. These rough gems were probably mixed in with fabulous Tourmaline and Emeralds, the likes of which had never been seen before even in the finest jewelry collections. When the Queen of Portugal saw them, it is said that she fell in love with the rich sherry and peachy pink colored Topaz she saw, and decided to wear them herself. From then on all of the finest Topaz was reserved for royalty, or for her to use as gifts. Thus the term Imperial Topaz began in Russian ballrooms, and was carried on to Portugal. Now the name has stuck!

Imperial Topaz has been mined in one source, Oro Preto Brazil, since the 1700s. Pockets of pink Topaz and brown Topaz have occurred in other locations, but none with the color of the rare Brazilian material. There is really only one mine area, which produces sporadically. Many of the finest Topaz we sell are sourced from old collections or from antique pieces of jewelry. We have a great stop of Natural Topaz in a variety of shapes and sizes, including larger stones (over 5cts) and rare matched pairs for topaz earrings. Below are four pairs showing the variety of hue and tone available. In addition to loose gems, we also have wonderful Imperial Topaz rings and Imperial Topaz pendants available to choose from.

If you are looking for the perfect November birthstone, or for a Topaz gift, come see us! Feel free to contact us if you want more information on imperial Topaz – or stop by to shop our collection!