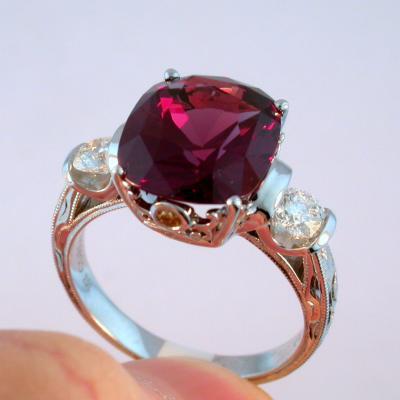 The garnet family of gemstones is one of the most underrated in the gem world. For the last century jewelers stocked red garnets heavily as the January birthstone, and then forgot about them for the rest of the year. This was a crime! Garnets are an ideal colored stone for use in jewelry. They come in every color but a true blue; they score a 7 on the Mohs Hardness scale and can stand up to regular wear in jewelry; and they are singularly refractive, a phenomenon of light performance that makes garnets brighter than other gems. Below is some information on the different types of garnet.

The garnet that most people are familiar with is the red to brownish red variety known as pyrope (the gems on the far left). These have been used in jewelry for thousands of years (known as carbuncle) and are frequently found in antique pieces. One of the most important discoveries of this gem is in the Czech Republic where it has been mined for over 200 years. “Bohemian garnet jewelry” refers to antique pieces in silver and gold that are highly ornate and set with many cabochon or rose-cut pyropes from this location. Most pyropes today come from East Africa and the USA. The African stones are largely garnets from Mozambique, where the gems occur in larger sizes of a brick-red color. These gems make excellent jewelry because you can get a big look for a relatively low price. Our favorite pyropes come from Arizona where the red color is caused by chromium (the same coloring agent as ruby) resulting in a more pure, deep red that truly stunning. Unfortunately these gems are rare in larger sizes, but when we set them in rose gold the true red color is remarkable and doesn’t need size to shine.

The other red variety of garnet is known as almandine (the two gems on the right). These stones are usually a very dark red, tending on black, and can have a slight violet tint as opposed to the brown tint of pyrope. There are some classic American locations of almandine, including Idaho and Alaska, which we see in many gem collections. Some of the red almandines from Idaho are actually star garnets, where a cabochon cut shows a 6-ray star within the gem. These red garnets are perfect for the person looking for a dressy, rich red color at a price lower than a ruby or tourmaline.

Rhodolite garnets are the most commonly encountered raspberry red to purple garnet. Gemologically speaking rhodolite is a blend of pyrope and almandine but color-wise it is its own distinct gem. These are found in small quantities all over the world but the main source is Africa. The African stones tend to be a medium red base color, with rosey pink or violet secondary shades. One African variety called “gypsy rose garnet” tends to be more pinkish red and has become a favorite among gem collectors. While Africa is producing rhodolite in the most quantity Sri Lanka still produces some of the finest examples. The key difference is that Sri Lankan rhodolites have a richer base color: a deep bing-cherry red and an exceptionally rare grape-jelly purple color. Fortunately we have relationships with Sri Lankan lapidaries that make sure we are the first to see their selection, allowing us to buy larger examples of this rare gem for reasonable prices.

We are also starting to carry a variety of rhodolite known as umbalite. These are named after the Umba River where they are found in Tanzania. Unlike most African rhodolites the umbalites are a medium purple instead of a medium red color. We have found a wonderful source for these gems where they are precision faceted in great sizes for jewelry.

Demantoids were the first green garnet discovered in the 1880s. The classic mines were in the Ural Mountains of Russia which produced a fair amount of material until the deposit was exhausted in the 1920s. The majority were an intense peridot-green, with the rarest pieces being a deep emerald green color. Demantoid has worked up a cult following for one main reason: its brilliance. In fact demantoid is greek for “diamond-like” because these gems have an extremely high refractive index, resulting in a brilliance and scintillation that surpasses that of a diamond. Recently demantoids were discovered in Namibia and Madagascar that are lighter in tone, and usually a more blueish mint green which is stunning and more reasonably priced than the Russian material. These gems are very rare: the Madagascan stone at the far right in the above picture is the only demantoid we have at the moment!

Tsavorites (are also green garnets but they are chemically distinct and more available than demantoid. Tsavorites are members of the grossular garnet group and are found only in East Africa. The first discovery occurred in the Tsavo Park area of Kenya in the late 1960s. Tiffany and Company bought the first rough from the mine, named the species, and has promoted the gem ever since. After the initial find several mines were found in the Merelani Hills of Tanzania which has increased availability of this material.

Tsavorite is a beloved gemstone in our store. No other gem comes as close to pure emerald or kelly green color. As we say: tsavorites are what emeralds want to be when they grow up! Some of the finest custom pieces we have made have featured tsavorite garnets, including our line of Seahawks jewelry.The medium dark green (caused by chromium) is the most desirable color, but the chromium also inhibits growth of the gem. Therefore tsavorites are rare over 1ct and scarce over 3cts. We also like to stock some of the lesser known shades like mint green garnets from Merelani (the round gem at left). These gems contain trace amounts of vanadium which gives them a blue tint similar to that of a Columbian Emerald in color.

Garnets are one of the few gem families that product pure orange gems. The most famous variety of orange garnet is spessartite (the middle three gems above). Spessartite garnets are colored by a blend of manganese and iron. When the gem has more iron present the color tends to be an orangey red or flame color. When the manganese is predominant the color tends to be a golden yellow or light orange. When the coloring agents are in balance the gems are a rich medium orange which is reminiscent of Fanta soda- these rare gems are known as mandarin garnets. The first spessartites that were large enough for use in jewelry were found in Germany, then California. But it wasn’t until these gems were found in Namibia and Nigeria in the 1990s that the material was commercially available. Even now good quality stones over 1ct from these famous locations are quite rare, since the larger stones tend to have lots of inclusions. We are starting to carry some from a recent find in Loliondo Tanzania that are coming out in larger sizes and lower prices- so stay tuned!

On the other hand Hessonite garnets never occur in the mandarin orange shades but they do come in two very unique tones (the far left and right above). The oldest known hessonites are the rich and intense cinnamon colored stones from Sri Lanka. These hessonites can be quite orange but typically have a strong brown undertone that makes them more of an earth tone. On the opposite end of the spectrum are the “imperial” hessonites that are a straw-yellow to golden orange color. Hessonites make a great jewelry choice because you can find larger, 3-5ct gems for affordable prices and the color is great for statement jewelry.

Garnets are unique in that the different varieties of garnet frequently blend together to create new, distinct species. The most famous of these are color change garnets (the two gems on the right) which were found in the 1990s in Bekily, Madagascar. The prospector who found the gem initially thought they had found alexandrite because the stones they had unearthed could change color. These particular gems were a teal or grey-blue outside, and a raspberry red to purple in incandescent light. This discovery was the first time a color change garnet had been seen, and even more important it was the first time a blue garnet had ever been found. Just like alexandrite these gems are very rare in large sizes. A newer find in Tanzania is producing some larger sizes but the color change is not quite as dramatic as the initial Madagascan find. For June babies who can’t (or wont) afford alexandrite, natural color change garnet is visually identical at about 1/5th of the price, and is actually rarer!

The other famous in-betweeners are both African garnets. The first is known as Malaya (or Malaia) garnet: a blend of rhodolite and spessartite garnets. These gems range from a blush pink to a deep orange color, but are mostly known as a blend between pink and orange which results in a sunset colored gem that is quite beautiful. Some of these Malaya garnets color shift between a beige-brown to a pink color that we have never seen in any other gem (above left). The second in-betweener is known as Mali garnet: a blend between grossular (tsavorite family) and andradite (demantoid family). These gems all occur in the yellow and green spectrum.  The most common colors are a golden yellow and lime green, although we have seen brown, orange, green, and even colorless examples. The in-betweeners are gemological oddities that are not widely known, so even though they are rare they can be purchased affordably.

Federal Way Custom Jewelers has served the South Sound for over 70 years. Our showroom features incredible one of a kind pieces made in house, brilliant loose stones, and staff whose expertise is unparalleled. Visit FWCJ today!