What is Alexandrite? Alexandrite is a gemstone of the chrysoberyl family. Alexandrite is bluish green in daylight and red by night. Alexandrite gemstone is purplish red in incandescent light. It is rated very hard on the hardness scale and is only exceeded in hardness by diamonds. It is because of this, and because it is one of the world’s most rare gems, that Alexandrite can be one of the costliest gemstones in the world. You will generally find Alexandrite Gemstone in rings and necklaces.

It sure seems like we find ourselves showing clients and talking about alexandrite more than any other gem. Among jewelry connoisseurs, one of the measures of a jewelry store is whether or not they carry natural alexandrite. On the other end of the spectrum there are a large number of June babies that have only heard of alexandrite, and have a natural curiosity to see what their birthstone looks like in person. 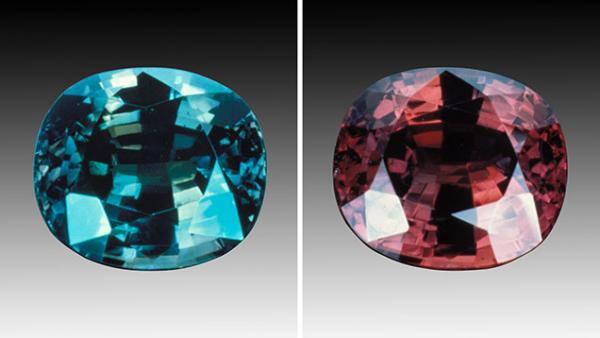 So if you don’t fit into either of the above categories, you may be wondering what Alexandrite is. In short, Alexandrite a very rare chromium-rich member of the mineral chrysoberyl that in fine qualities exhibits a change of color depending on the light source it is viewed under. It is often said that alex’s are “emerald by day, ruby by night” because they tend to be a teal or grass green under fluorescent light and a raspberry to brownish red under incandescent or candle light. The stone was named after Tsar Alexander because the first examples of alexandrite were found in Russia in the 1870s; since that time they have been discovered in Brazil, Sri Lanka, India, Tanzania and Madagascar. The above Brazilian gem is a particularly fine example, photo courtesy of the GIA.

As with all colored gemstones there is no such thing as the perfect specimen. In alexandrite the most common fault is clarity. Some of the gems with the strongest (most apparent) color change are heavily included or foggy looking. Likewise the most beautiful gems will often display a strong green, but almost no red in the color change, or will be too light in tone to view the phenomenon. One of my pet peeves is when I see a fine alexandrite, which due to its rarity, has been cut to make the largest stone possible instead of to maximize brilliance and beauty.

Most of the Alexandrites we carry are from Brazil and Sri Lanka because the Russian stones are scarce, the African stones tend not to change color as well, and the Indian stones are often too small for our uses. My favorites are Brazilian because they have a color intensity that is unrivaled even by the finest Russian stones. We are also a strong buyer of Alexandrites on the second hand market, which allows us to source fine quality alexandrites at a slightly lower price point than if we had to pay for multiple middlemen in the import process. While we will order in synthetic alexandrite on request, nothing quite compares with the real thing so we only stock natural alexandrites.

The above ring is a true stand out for alexandrites. The center gem weighs 1ct and is accompanied by a Stone Group Labs report stating that the gem is natural and likely Brazilian in origin. The left photo shows the gem in pure outdoor light, the center photo is mixed lighting, and the right photo is under an open flame. This gem displays a very strong 90-95% color change and is coupled with a medium-dark tone so that the gem is bright and lively. This is simply the best Alexandrite ring we have sold in my 9 year tenure at FWCJ.